I’m pretty sure I’m not the only one who has watched those shows featuring the making of billionaire’s yachts with envy, particularly that part where the interior designer does up the yacht’s interior spaces. It’s just not fair how the bedroom of a yacht or just about any other interior space can be bigger than the average interior space of an average home, even more so with newer properties which seem to be getting smaller and smaller. 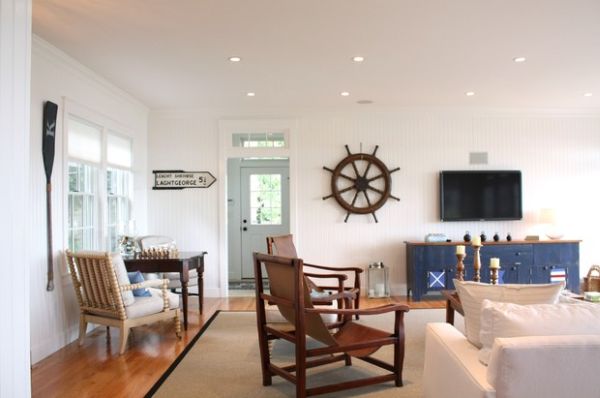 On a little bit more on a positive note though, I do in fact get a lot of inspiration from the way in which the interiors of mega-yachts are done up and I think the next time I redecorate I’m going to go all the way with a maritime-inspired theme. I’m definitely not alone because upon asking around and doing a little bit of sniffing around online, I found that mega-yacht inspired decor is actually a thing! It appears to be all about the way in which you arrange your living spaces in such a way that they flow into the outdoors, where there should either be a pool, some blue skies that go on forever (when it’s not raining, that is), or an ocean-facing exterior for those who are lucky enough to be able to buy close to the sea.

It’s all about creating the illusion of being on the deck, with regards to those spaces on your property that open up into the outdoors of course. So wooden decking or brownish/dark tiles will do, while the furniture mimics that which you’d find on a yacht. Those contemporary chairs which assume more of a lounger type style are the best at achieving this effect and if you can get the deck as close as possible to the pool then you’ll be as close as you can get to recreating that mega-yacht interior look.

The Living Room, Bedroom and Other Interiors

Getting into the interiors proper (away from those spaces which flow into the outdoors), mega-yacht interiors seem to be rather limited in their space, but that’s just another illusion. The space is just maximised to fit as many functional items in as possible, while maintaining good style, so this is definitely something you can do with the interiors that you want to have assuming the style of a mega-yacht.

Contemporary table lamps seem to do the trick really well as far as the styling goes, quite simply because the light they give off is functional but has that luxury feel to it. Otherwise high table tops in just about any interior space do well to mimic that luxury feel of a mega-yacht’s interior, in that they cut the eye off from seeing those outside surfaces that give it away that you’re not out at sea, while creating that floating feeling of being out at sea. When you look out what you want to see is either the blue sky which goes on forever, or your pool presented in an infinity-edge type of illusion.